Using 2nd Hand Floorboards For a Deck is Bad

Using 2nd Hand Floorboards For a Deck is Bad 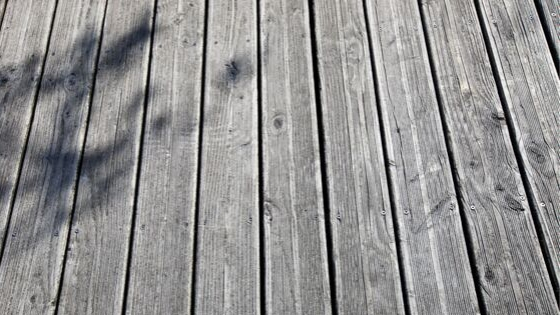 Recently I had the privilege of going out and quoting on a deck that had been laid only 1 year ago , the woman was a single mum and worked fulltime supporting 3 kids under the age of 15 , and had worked hard enough to save a bit of cash so as to put a deck around her swimming pool $13,000 in fact , she loved Jarrah and wanted the deck in jarrah , which of course was her choice.

On seeing the deck I was dumbfounded to see that the deck had only been laid a year ago, and what’s worse was that who ever laid the deck did a crappy job through and through … crappy timber, crappy workmanship & crappy advice topped of with an exorbitant price that only a cowboy would charge ($210 p/sq m for crappy timber).  Let me tell you, this isn’t the first time I have seen something like this.

What I saw shocked me because the lovely lady wanted jarrah but also wanted a really good price, and so the tradie said that he would try second hand jarrah floor boards that had been denailed , and  had the tongue planed off, so the timber was, in the end, 85mm x 16mm, and cut into shorter lengths ,which for a floor board inside the house is ok , but for something exposed to rain, sun and pool chemicals is totally unacceptable. The timber had a lot of vain in it, as jarrah normally does, unless it is “A” grade timber , and outside, vain is the enemy on decks. Inside, black vain in jarrah timber looks beautiful. However outside when exposed to the elements is a nightmare!  I am surprised the tradie never told this woman that this would happen or put his name to this type of work. It took only 1 year for the timber to start splitting along the vains and was falling of the frame everywhere. It goes without saying that the reason I was there was because the guy that did it was nowhere to be found. So after I told this lady about the timber she became a bit white and realised the whole deck 60sq/m had to come up.

What I found next horrified me. I found that the carpenter or shall I say cowboy used framing timber  the same as roof tile battens, 50mm  x 25mm  and did this because he had to go over the top of brick paving. Not only did the complete deck have to come up, but the frame had to come up as well. Anything less than this would  have a bad result down the track as to the look and quality of the deck.

The woman asked if we could fix where the timber had been coming apart, but once she really inspected it after me showing her what will happen in the next 12 months she abandoned the idea, she was pretty upset, and didn’t have enough money to do it all over again, and decided to pull it up herself, of which I don’t blame her. Iit look like the worst deck I had ever seen.

Needless to say that when you are thinking about a deck, always go with someone who knows what they are doing. Roof carpenters aren’t necessarily experts at decking. They are experts at roofing and I see that clearly now after seeing other workmanship and building decks flat-out for 6years.  It needs a bit of knowledge about timber, and knowledge of how to build the deck for your specific situation/environment, allowing for expansion and contraction.  There isn’t just 1 way to build a deck. There is a couple and each case needs a bit of thought as to how to get the best possible result in the look and the quality of the deck.

I use A grade timber always because it likes the outdoors, timber with no black vain, solid right through but not brittle and too hard. Something that will age with time and look good for years to come without drying out and splitting or opening up the grain, I prefer to use screws and wide boards that are thicker 140mm X 22-25mm. This in my eyes is a heavy duty deck, built to last.

If you're considering getting some timber work done at your property or need some advice about some older decking work, please reach out and ask your questions. We're more than happy to help.